Coherent Raman microscopy (CRM) is a chemically-selective imaging modality that provides microscopic contrast without the need of labels. It is a rapidly developing technique that is constantly finding new and exciting applications. Here we show some examples of our work in the past a few years.

Many experiments in cell biology are limited by the use of perturbative labels. Fluorophores, beads, or metal particles can have large effects on the behavior of a labeled molecule or organelle in a living organism. Lipid droplets have recently emerged as important intracellular organelles relevant for widespread human diseases such as diabetes, hepatosteatosis and atherosclerosis. The ability to visualize lipid droplets within cells and study their biogenesis and function, however, is hampered by the lack of specific staining dyes, as well as the aforementioned problems associated with labeling. CRM’s exquisite sensitivity to lipids makes it an ideal tool to study lipid cell biology.

We used RNA interference screening to study the regulatory genes affecting the lipid storage in C. elegans [1]. Figure 1 shows the SRS image of wild-type and mutant C. elegans at 2845 cm-1. The contrast is mostly from lipids, revealing the lipid content in the intestine. 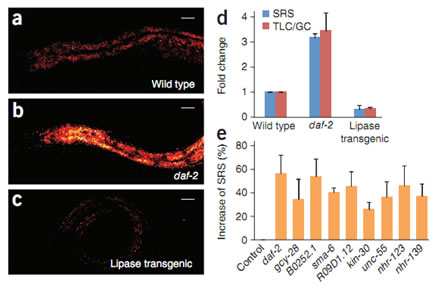 Fig. 1. RNAi screening of new fat storage regulatory genes based on in vivo lipid quantification using label-free SRS microscopy. SRS images at 2845 cm-1 for wild-type worm (a), the daf-2 mutant (b), and the transgenic worm intestinally overexpressing the lipase (c). (d) Quantification of fat content by SRS (n = 5 worms) and thin-layer chromatography–gas chromatography. (e) SRS signal increase compared to the control for genes that resulted in a fat content increase of more than 25% when inactivated by RNAi (P < 0.0001, n = 5 worms).

Coherent Raman microscopy can be used to study drug-cell and drug-drug interaction at subcellular resolution in living cells. In order to distinguish drug from cellular components, hyperspectral SRS data is required. We took hyperspectral SRS images of imatinib (trade name Gleevec) and nilotinib (trade name Tasigna) treated mouse leukemia cells and found that these drugs have a surprisingly large enrichment inside lysosomes. The enrichment is due to the lysosomotropic properties of these drugs: weakly basic drugs are protonated in lysosomes (thus are charged) and then trapped inside. However, this effect can be reversed by using a secondary drug chloroquine, which interacts with Gleevec through acid-base equilibrium in the lysosome and drives out Gleevec (thus increases its efficacy). For Tasigna, the same approach does not work at high Tasigna concentration because it precipitates inside lysosome before the pH of the lysosomes can be changed by chloroquine. CRM microscopy provides an interesting new contrast mechanism for imaging tumors in tissue. In particular, by making use of differences in lipid density and protein density, the nuclei morphology can be derived, providing contrast analogous to H&E histopathology. Tumor margins can be seen with subcellular spatial resolution in fresh, unstained tissue.

Figure 3 shows the post-processed SRS images of both primary and metastatic tumors, highlighting the lipids (green) and nucleic contrast (blue). As can be seen, not only the tumor margin can be identified, but the margin of the primary tumor and metastatic tumor are also distinguishable. Comparison with histological data and Raman spectroscopy has established the chemical selectivity of the technique, and efforts to establish the use of CRM as a tool for virtual histology during brain tumor surgery are underway.

It is also possible to obtain whole mouse brain imaging by stitching many SRS images together. Figure 4 shows the image of a mouse brain section about 2 mm in thickness. Anatomy of the brain can be clearly delineated with the two color image.

As a chemically sensitive technique, CARS microscopy has many applications outside biomedicine. One example is studying degradation of cellulose and lignin for biofuel production. Research of biofuels has experienced dramatic growth in recent years. The major challenge to be overcome in the widespread adoption of many biofuels is that biomass is intrinsically recalcitrant, partly caused by one of the two main chemical species in biomass, lignin. The SRS microscopy method can offer new information on the biomass conversion processes. Figure 5 shows the real-time monitoring of the hydrolysis kinetics of cellulose and lignins under chlorite treatment. Fig. 5. Real-time SRS imaging of a delignification reaction in corn stover. a) and c) Lignin signal at 1600 cm-1 before and 53 min after chlorite treatment reaction. b) and d) Corresponding cellulose signal at 1100 cm-1. e) color-coded rate constant of lignin degradation.