Optical microscopy is unique among current imaging modalities in its ability to probe living specimens with subcellular resolution, enabling the visualization of morphological details in tissue and cells on the scale of a few hundred nanometers. The discovery and broad application of genetically encoded fluorophores, such as GFP and YFP, to tag specific proteins has had a considerable impact on modern microscopy. Additionally, fluorescence microscopy has superb sensitivity (see single molecule section). Labeling and staining may, however, perturb the studied system. This is especially true for small molecules, such as metabolites and drugs, for which the attachment of ‘big’ labels can change the biological function.

Raman microscopy is an alternative technique that enables label-free chemical imaging. It is based on the Raman scattering effect of molecules that was discovered by Indian scientist C.V. Raman in the early 1930s. When light is shined on a molecule, it can be inelastically scattered and gives off light at lower energy. All molecules have specific Raman signatures typically spanning from 100 cm-1 to 3500 cm-1. Figure 1 shows an example of the Raman spectrum of a biological cell. The Raman spectrum is highly dependent on the chemical structure, but almost unaffected by the local environment, of the molecule. Therefore, it is not only specific, but also quantitative. 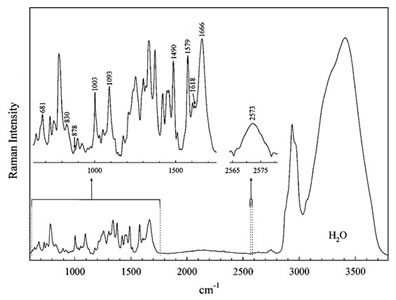 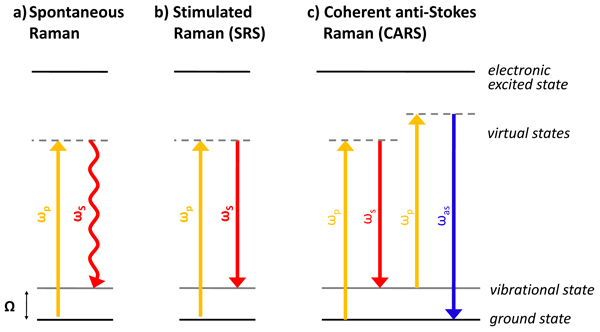 Fig. 2. Energy diagrams of Raman interactions: a) Spontaneous Raman scattering microscopy. Pump-field is inelastically scattered off molecular vibrations of the sample, generating new, red-shifted field components at the Stokes frequencies ωs = ωp - Ω. b) Stimulated Raman Scattering (SRS) microscopy. Both pump- and Stokes-frequencies are incident on the sample. If the frequency difference Δω = ωp - ωs matches a molecular vibration of the sample Ω, stimulated excitation of vibration transitions occurs. The intensity of the pump-field experiences a loss (SRL) and the Stokes-field a gain (SRG). c) Coherent anti-Stokes Raman Scattering (CARS) microscopy is a four-wave mixing process generating a new field at the anti-Stokes frequency ωas = 2ωp- ωs. When energy difference Dw matches a molecular vibration of the sample, the scattering process is resonantly enhanced.

Vibrational spectra of biological specimens contain a multitude of molecular signatures that can be used for identifying biochemical constituents in tissue. Infrared absorption (FT-IR) microscopy is limited by low spatial resolution due to the long wavelength of infrared light and low penetration depth into biological specimens due to strong water absorption. Spontaneous Raman scattering (Fig. 2a), overcoming the problems associated with the long excitation wavelengths, lacks the sensitivity required for rapid imaging. Stimulated Raman Scattering (SRS) and Coherent anti-Stokes Raman Scattering (CARS), shown in Fig. 2b and 2c, respectively, allow the enhancement of the weak Raman signal by means of nonlinear excitation, enabling imaging to speed up to video-rate. 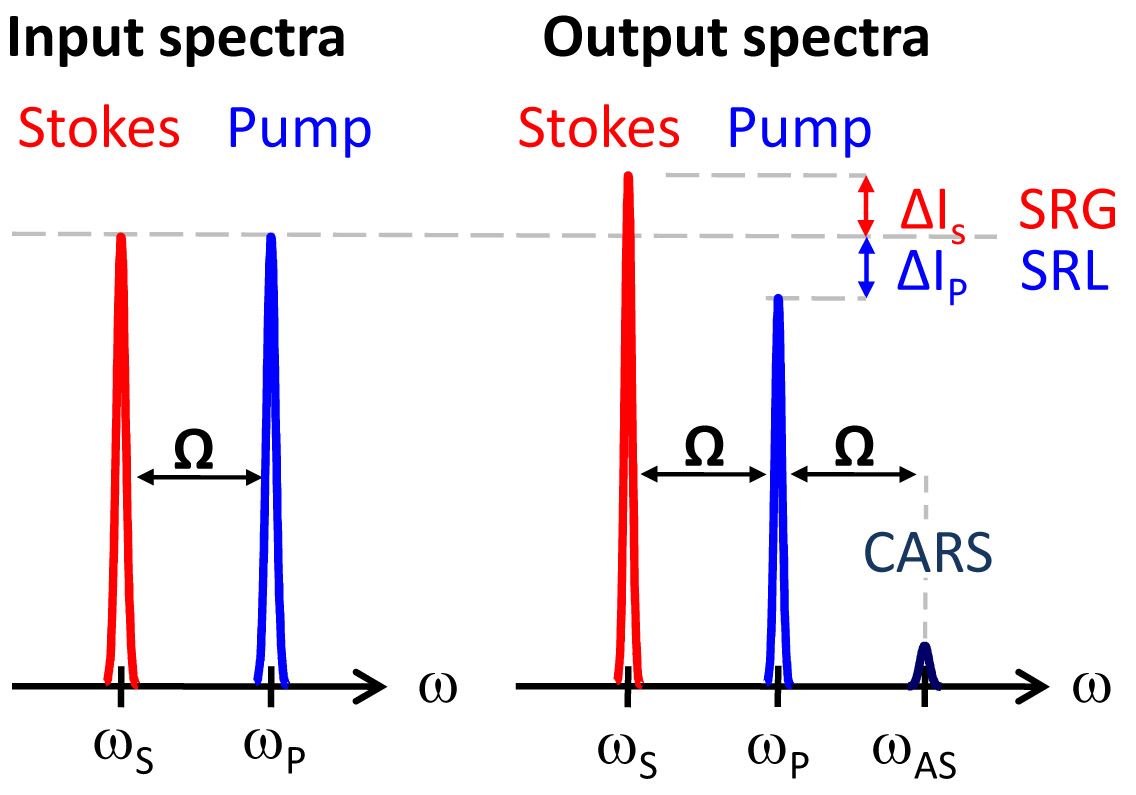 Fig. 3. Input and output spectra of SRS and CARS

SRS leads to an intensity increase in the Stokes beam (SRG) and an intensity decrease in the pump beam (SRL). Also shown (not to scale) is the CARS signal generated at the anti-Stokes frequency. Coherent Raman imaging provides chemically-specific contrast without any preparation or labeling. Figure 4 shows an example of mouse skin imaging using SRS. For the acquisition of this image stack in mouse ear, SRL image contrast was tuned into the CH2-stretching vibration. As such, lipid rich structures of the skin were highlighted. From top (beginning of the movie) to bottom (end of the movie):