In mammals, the sense of smell relies on their massive array of genes encoding olfactory receptors (ORs). ORs are G-protein-coupled receptors and constitute the largest gene family in mammalian genomes. For example, mice carry ~1,400 different OR genes, each sensing a different set of odors and together accounting for 6% of all genes in the mouse genome (Figure 1A).

For the olfactory system to function properly, the staggering number of OR genes must be expressed in an unusual pattern: Each sensory neuron randomly chooses one, and only one, OR gene for expression (Figure 1B). In neurobiology, a fascinating question is how this “singularity” can be achieved despite intrinsic stochasticity of gene expression.

Fig. 1. (A) Olfactory receptors (ORs) are the largest gene family in mammalian genomes. (B) The sense of smell relies on the "singular" expression of ORs: Each neuron chooses one, and only one, OR gene.

Inspired by experimental observations from Stavros Lomvardas’ group, we build a simple kinetic model of OR expression (Figure 2, top left). Initially, each OR gene is wrapped around histones that contain repressive methylation and is thus silenced (the “Off” state). Once any ORs are activated through histone demethylation (to the “On” state), their expression will induce a negative feedback that depletes the demethylase required for OR activation (Figure 2, bottom).

We show theoretically that this scheme of activation and feedback can indeed generate OR singularity, if two timescales—slow activation (T, 5–10 days) and fast feedback (Δt, 1–2 hours)—are well separated (Figure 2, bottom). In fact, the probability of failure—defined as expressing more than one OR—is proportional to the ratio Δt/T (Figure 2, top right). 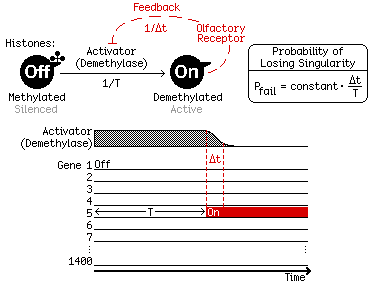 Our work demonstrates a striking example of enzyme kinetics, in which the nervous system utilizes the relative timescales of slow epigenetic changes (histone demethylation) and fast transcriptional regulations (depletion of the demethylase) to generate a dramatic outcome in neurogenesis. Our conclusions are generally applicable to other systems where singularity is desired, such as V(D)J recombination in the immune system and the expression of protocadherins.