In vitro fertilization (IVF), preimplantation genetic diagnosis (PGD), and preimplantation genetic screening (PGS) help patients to select embryos free of monogenic diseases and aneuploidy (chromosome abnormality). Next-generation sequencing (NGS) methods, while experiencing a rapid cost reduction, have improved the precision of PGD/PGS. However, the precision of PGD has been limited by the false positive and false-negative single-nucleotide variations (SNVs), which could mislead the decision making in IVF, but can be circumvented by linkage analyses such as short tandem repeats or karyomapping. It is noteworthy that existing methods of detecting SNV/copy number variation (CNV) and linkage analysis often require separate procedures for the same embryo. In collaboration with Jie Qiao’s group at Peking University, and Fuchou Tang’s group at BIOPIC, we developed a technique that combines low-coverage whole-genome sequencing for aneuploidy detection with targeted deep sequencing and linkage analysis to identify SNVs. This method, called “mutated allele revealed by sequencing with aneuploidy and linkage analyses” (MARSALA), involves our previously developed technique of multiple annealing and looping-based amplification cycles (MALBAC) for single-cell whole-genome amplification. 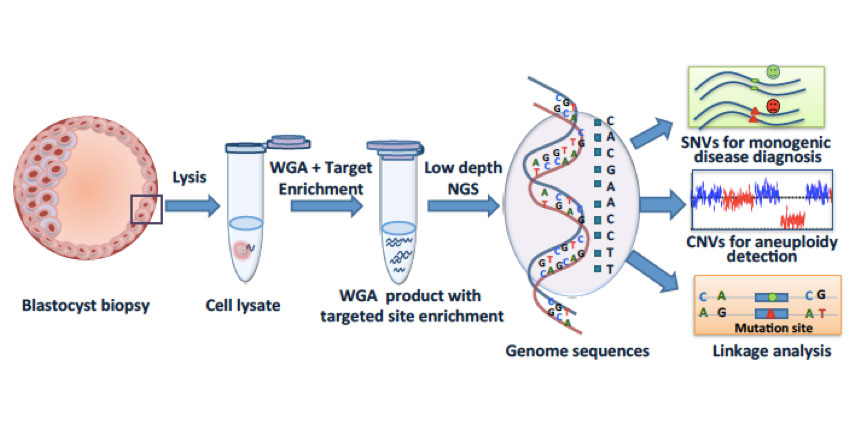 MARSALA allows the simultaneous observation of aneuploidy, targeted mutation sites, and their linked SNPs. It has improved the precision of PGD and PGS markedly and has streamlined the PGD/PGS procedure. It is also cost effective compared with microarray-based methods. In principle, MARSALA can be carried out with any WGA method. We chose MALBAC because it has the lowest allelic dropout (false-negative rate for SNV) and the highest precision for CNV detection.

MARSALA allowed us to precisely select embryos from two couples seeking to avoid the passage of their known monogenic diseases onto their progeny. In our first case the husband has a family history of an autosomal dominant disorder and has suffered from hereditary multiple exostoses (HME), characterized by multiple bony spurs or lumps in the bones from an early age. Genetic diagnosis of the husband showed a frame-shift point mutation c.233delC at the exostosin glycosyltransferase 2 (EXT2) gene, already known to cause this disease. This couple underwent IVF and PGD treatment. Eighteen of their embryos developed to the blastocyst stage, and for each a cluster of trophectoderm (TE) cells was biopsied for PGD. The DNA of all biopsies was amplified successfully by MALBAC. Using MARSALA, one embryo was selected for transfer that was neither disease affected nor aneuploid.

In our second case, the wife carries an X-linked chromosome recessive hereditary disorder, hypohidrotic ectodermal dysplasia. The couple already has an affected son who suffers from this X-linked disorder, which is characterized by abnormalities in the hair, sweat glands, and teeth. Genetic diagnosis of the son showed a point mutation c.T1085G at the ectodysplasin A1 (EDA1) gene, inherited from his mother. This mutation has been known to be associated with the hypohidrotic ectodermal dysplasia disorder. Five of the couple’s embryos developed to the blastocyst stage on day 6, and their TE cells were biopsied and analyzed by MARSALA. Three of the five were neither affected by the mutation nor were aneuploid, among them one was selected for transfer.

Two healthy babies, free of the monogenic diseases of their parents, were born based on such embryo selection in September and November of 2014. This brings the good news to patients with monogenic diseases that passing their genetic disorders to their offspring can now be avoided with high accuracy, and provides a tangible example of precision medicine.