Many DNA-binding proteins need to locate target sites in DNA very quickly. These proteins face a difficult needle-in-a-haystack problem: the rare target sites are hidden among billions of nonspecific sites in a large DNA genome. These proteins are thought to solve the search problem through a combination of “hopping” among different DNA segments and “sliding” along DNA segments. While there exists evidence for diffusion of proteins along DNA [1], it has not been clear if this took place exclusively by hopping or whether the proteins can slide in contact with the DNA. 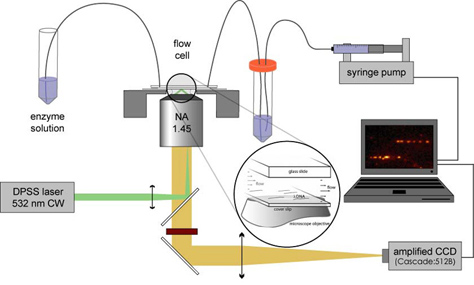 Oxoguanine (OxoG) is a highly mutagenic DNA lesion formed in cells when free radicals react with DNA [3]. With colleagues from Greg Verdine’s Group, we investigated the search behavior of human oxoguanine DNA glycosylase 1 (hOgg1), the DNA repair protein that initiates repair of OxoG (structure* shown below). To prevent harmful genetic changes from occurring in our bodies, hOgg1 must find and initiate repair of OxoG quickly.

We label hOgg1 with the fluorescent dye Cy3B at the protein’s C-terminus. When a small amount of the labeled protein is added to the flow solution, we observe that the DNA repair enzymes attach to and move along the flow-stretched DNA strands. Over the course of a few minutes we see hundreds to thousands of protein molecules attach to, move along, and dissociate from each DNA strand in the field of view. By determining the positions of the molecules in each frame of a recorded movie, we can trace out the path each protein molecule took as it moved along DNA searching for OxoG. 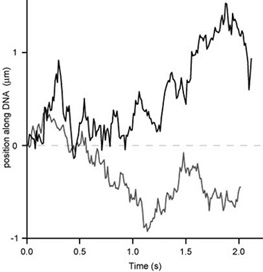 Using many such molecular trajectories, we can construct population-averaged mean-square displacement plots to accurately measure the protein’s diffusion constant under a given buffer condition. 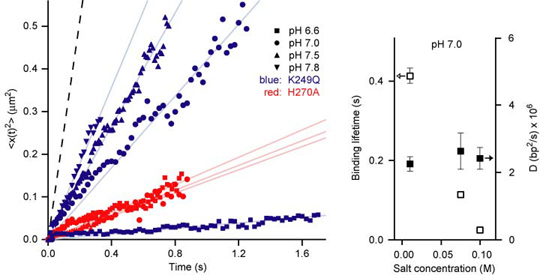 hOgg1’s diffusion constant is independent of salt concentration. Since a protein hopping along DNA would appear to diffuse much more quickly as its binding to DNA is weakened by increasing salt, we conclude the hOgg1 diffuses rapidly along DNA while maintaining persistent contact, literally sliding along the DNA. hOgg1’s sliding activity is also pH-dependent. The fast one-dimensional sliding (D > 5,000,000 bp2/s) observed at higher pH requires the presence of a certain amino acid (histidine 270) on the part of the protein that contacts DNA. Nonspecifically bound proteins spin while diffusing along DNA As discussed above, we experimentally observed that DNA-binding proteins can slide along the DNA helix while searching for specific binding sites, but their path of motion remains obscure. Do these proteins undergo simple one-dimensional (1D) translational diffusion, or do they rotate to maintain a specific orientation with respect to the DNA helix? We experimentally measured the apparent 1D diffusion constants as a function of protein size while maintaining the DNA-protein interface [4]. If the protein undergoes one dimensional diffusion along the axis of the DNA, according to hydordynamics [5], the diffusion constant should be

where R is the radius of the protein and η is the viscosity. If the protein undergoes rotation-coupled translational diffusion as if going along a barbers pole, a theory by Bagchi et al [6] predicted

where b is the helical pitch of DNA and ε is the protein binding energy fluctuation along DNA, and Roc is defined in the figure below.

As shown in the above figure, the size dependence of the measured apparent 1D diffusion constants indicates that DNA-binding proteins undergo rotation-coupled sliding along the DNA helix rather than sheer translation [4]. The fact that eight proteins of varying size are consistent with the theory of spinning along the DNA helix in a rugged free-energy landscape [6] indicates that rotation-coupled sliding is a general phenomenon. The average free-energy barrier ε is 1.1 ± 0.2 kBT. Such small barriers facilitate rapid search for binding sites.