Single-molecule optical detection at room temperature dates back to 1976 when Hirschfeld reported the use of an optical microscope to reduce probe volume, and hence the background signal (1). He was able to detect individual immobilized protein molecules labeled with tens of fluorophores, demonstrating a single-molecule line-scan image. Similar use of optical microscopes finally allowed single fluorophore sensitivity at room temperature in 1990 (2,3). It has remained the method of choice for detecting and imaging single molecules in ambient environments to the present.

Among the methods that subsequently emerged, single chromophore detection was first achieved by optical absorption measurement at 1.6K with a sophisticated frequency modulation scheme in 1989 (4). This measurement relied on the large absorption cross-section of the zero-phonon line. It was soon followed by fluorescence detection via excitation at the zero-phonon line, which offered much higher sensitivity by virtue of background free emission detection (5). These methods, however, were limited only to cryogenic temperatures at which zero-phonon lines exist for a handful of molecules.

Imaging of single fluorophores at room temperature was first accomplished with near-field microscopy in 1993 (6). Our group was fortunate to participate in the early development (7,8). However, near-field single molecule imaging had limited applications because of the complexity and perturbation of the near-field probes, and was soon surpassed by much easier far-field single molecule imaging with total internal reflection (9) and confocal microscopy (10,11).

Many molecules in nature absorb but do not fluoresce. This is why many groups around the world have been attempting detection of single-molecule absorption at room temperature in the past twenty years. Recently, three groups simultaneously reported three different approaches that allow the detection of individual molecules through their absorption of visible light (12-14). Sangdoghdar and coworkers relied on direct attenuation measurement by using balanced detection to minimize intensity fluctuations and selecting samples with minimal scattering (12). Orrit and coworkers used a photothermal method in a pump-probe setup (13).

Our group demonstrated the detection of room-temperature single-molecule absorption by ground-state depletion microscopy (14). This is accomplished by using two tightly-focused collinear continuous-wave laser beams at different wavelengths both within a molecular absorption band, one of which is intensity-modulated at a high frequency (>MHz). The transmission of the other beam is modulated at the same frequency due to ground state depletion. The signal of single chromophore molecules scanned across the common laser foci can be detected with shot-noise limited sensitivity. Our method provides absorption-like contrast free from the complication of sample scattering. The overall quadratic power dependence of the ground-state depletion signal would allow three-dimensional sectioning. 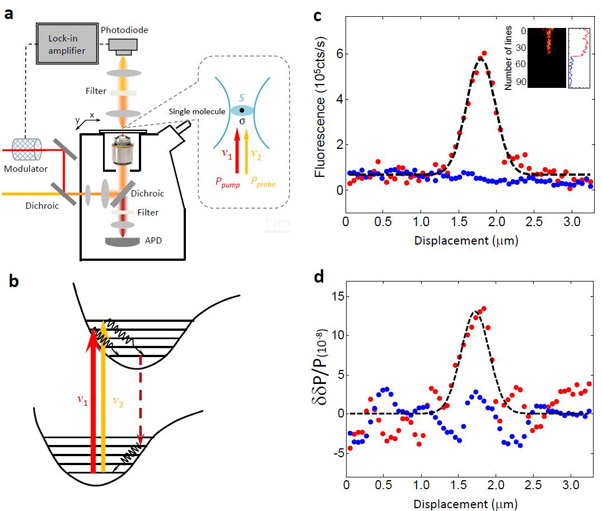